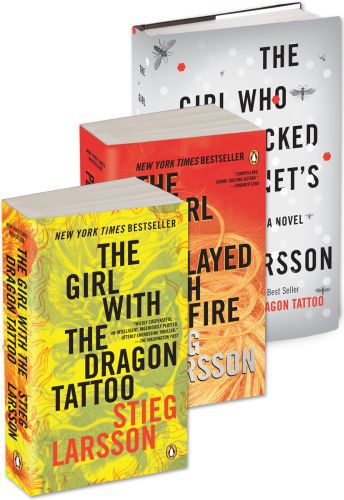 The Girl Rules. Purchase Stieg Larsson's internationally bestselling Millennium Trilogy--now in a single ebook format. The Girl with the Dragon Tattoo Forty years ago, Harriet Vanger disappeared off the secluded island owned and inhabited by the powerful Vanger family. There was no corpse, no witnesses, no evidence. Her uncle, Henrik, is nonetheless convinced that she was murdered by someone from her own deeply dysfunctional family. Disgraced journalist Mikael Blomkvist is hired to investigate, but he quickly finds himself in over his head. Then he hires the gifted and conscience-free computer hacker Lisbeth Salander as his assistant--and the two unravel a dark and appalling family history, a vein of astonishing corruption, and an unexpected connection between themselves. The Girl Who Played with Fire Salander, the troubled, wise-beyond-her-years hacker from The Girl with the Dragon Tattoo, is suspected of the murder of two journalists who have uncovered an extensive sex trafficking operation--one that implicates highly placed members of Swedish society, business, and government. Blomkvist, alone in his belief in her innocence, plunges into his own investigation of the slayings. Drawn into a hunt in which she is the prey, Lisbeth is compelled to revisit her dark past in an effort to settle with it once and for all. The Girl Who Kicked the Hornet's Nest In the stunning conclusion to the Millennium Trilogy, Salander is fighting for her life and poised to stand trial for a triple murder. With Blomkvist's help she'll not only have to prove her innocence, but also identify and denounce those in authority who have allowed the vulnerable to suffer abuse and violence. And, on her own, she will plot revenge against the man who tried to kill her. Over 45 million copies sold worldwide. Read the books. See the films.