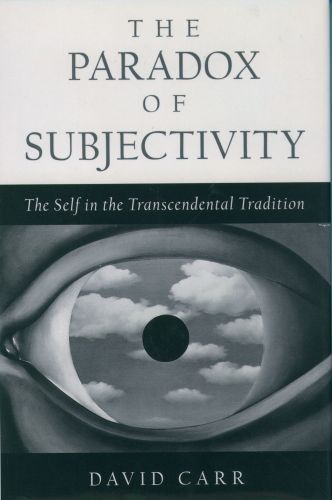 The Paradox of Subjectivity: The Self in the Transcendental Tradition

Much effort in recent philosophy has been devoted to attacking the metaphysics of the subject. Identified largely with French post-structuralist thought, yet stemming primarily from the influential work of the later Heidegger, this attack has taken the form of a sweeping denunciation of the whole tradition of modern philosophy from Descartes through Nietzsche, Husserl, and Existentialism. In this timely study, David Carr contends that this discussion has overlooked and eventually lost sight of the distinction between modern metaphysics and the tradition of transcendental philosophy inaugurated by Kant and continued by Husserl into the twentieth century. Carr maintains that the transcendental tradition, often misinterpreted as a mere alternative version of the metaphysics of the subject, is in fact itself directed against such a metaphysics.
Challenging prevailing views of the development of modern philosophy, Carr proposes a reinterpretation of the transcendental tradition and counters Heidegger's influential readings of Kant and Husserl. He defends their subtle and complex transcendental investigations of the self and the life of subjectivity. In Carr's interpretation, far from joining the project of metaphysical foundationalism, transcendental philosophy offers epistemological critique and phenomenological description. Its aim is not metaphysical conclusions but rather an appreciation for the rich and sometimes contradictory character of experience. The transcendental approach to the self is skillfully summed up by Husserl as "the paradox of human subjectivity: being a subject for the world and at the same time being an object in the world."
Proposing striking new readings of Kant and Husserl and reviving a sound awareness of the transcendental tradition, Carr's distinctive historical and systematic position will interest a wide range of readers and provoke discussion among philosophers of metaphysics, epistemology, and the history of philosophy.