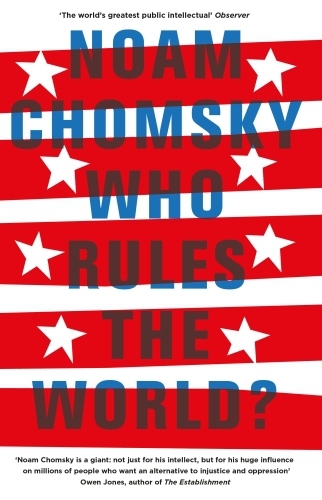 Who Rules the World?

Internationally renowned political commentator Noam Chomsky examines America's pursuit and exercise of power in a post 9/11 world
Noam Chomsky is the world's foremost intellectual activist. Over the last half century, no one has done more to question the great global powers who govern our lives, forensically scrutinizing policies and actions, calling our politicians, institutions and media to account.The culmination of years of work, Who Rules the World? is Chomsky's definitive intellectual investigation into the major issues of our times. From the dark history of the US and Cuba to China's global rise, from torture memos to sanctions on Iran, Chomsky explores how America's talk of freedom and human rights is often at odds with its actions. Delving deep into the conflicts in Iraq, Afghanistan, and Israel/Palestine, he provides nuanced, surprising insights into the workings of modern-day imperial power.The world's political and financial elite have become ever more insulated from democratic constraints on their actions. Chomsky shines a powerful light on this inconvenient truth. With climate change and nuclear proliferation threatening the survival of our civilization, the message has never been more pertinent or more urgent: the need for an engaged and active public to steer the world away from disaster grows ever greater.Fiercely outspoken and rigorously argued, Who Rules the World? is an indispensable guide to how things really are from the lone authoritative voice courageous and clear-sighted enough to tell us the truth.