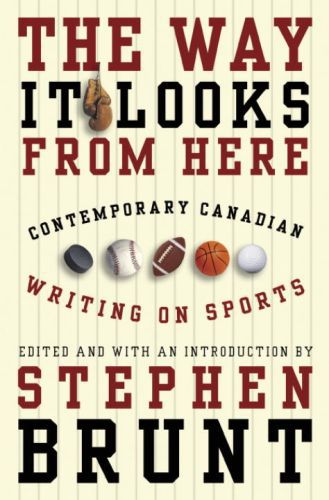 The Way It Looks from Here

In the first ever anthology of its kind, Canada's premier sportswriter -- Globe and Mail columnist and author of the internationally acclaimed bestseller Facing Ali -- brings together the best writing on sport in this country, with a strong contemporary flavour.
It's all here: classic reports on Canada's great sporting triumphs, from Joe Carter's World Series-winning home run for the Toronto Blue Jays in 1993 to the excitement of the back-to-back men's and women's hockey gold medals in Salt Lake City. Stephen Brunt gives an entire section to writers who, unlike those covering other beats, must work tightly by the clock, submitting their stories just as soon as the action for the day is over. But he has also chosen our best writers' more thoughtful pieces on our national obsessions -- such as Ed Willes on the WHA's seven tumultuous years and Wayne Johnston on the Original Six -- and a good sampling of the great sportswriters such as Trent Frayne, Peter Gzowski and Milt Dunnell. The net effect is an examination of the deep role sport plays in our lives and imaginations, in our sense of self and nationhood.
Stephen Brunt has cast his net widely. He includes superb stories of lower profile Canadian sports such as wrestling and horse racing, even Monster Truck battles, and allows space for his own unequalled and unforgettable profiles of Muhammad Ali and Mike Tyson, as well as his post-mortem on Ben Johnson's fall from grace.
Full of triumph and heartbreak, great writing and great passions -- and a few wonderful surprises -- this book will be essential reading for every serious sports fan.
Including:
- Ian Brown on the stud-horse business
- Christie Blatchford on the 2003 Women's Olympic Hockey Gold
- Rosie DiManno on the Men's
- James Christie on Ben Johnson's 1988 Olympic triumph in Seoul
- Michael Faber on Pat Burns
- Red Fisher on Lemieux and Gretzky at the 1987 Canada Cup
- Trent Frayne on Canadian Open golf champ Ken Green deciding to play Sun City during apartheid
- Bruce Grierson on Canada's best squash player
- Peter Gzowski on the Oilers with Gretzky
- Tom Hawthorn on John Brophy's last brawl
- Brian Hutchinson on Owen Hart's widow's revenge
- Wayne Johnston on the Montreal Canadiens
- Guy Lawson on curling
- Allan Maki on the 1989 Hamilton-Saskatchewan Grey Cup
- Dave Perkins on the biggest home run in World Series history
- Mordecai Richler on snooker's Cliff Thorburn
- Steve Simmons on Donovan Bailey
- Mike Ulmer on Cujo's charm
and more...
From the Hardcover edition.