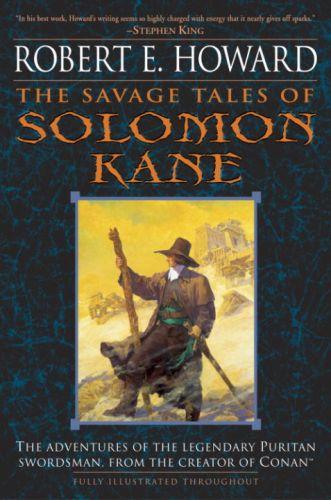 The Savage Tales of Solomon Kane

With Conan the Cimmerian, Robert E. Howard created more than the greatest action hero of the twentieth century—he also launched a genre that came to be known as sword and sorcery. But Conan wasn’t the first archetypal adventurer to spring from Howard’s fertile imagination. “He was . . . a strange blending of Puritan and Cavalier, with a touch of the ancient philosopher, and more than a touch of the pagan. . . . A hunger in his soul drove him on and on, an urge to right all wrongs, protect all weaker things. . . . Wayward and restless as the wind, he was consistent in only one respect—he was true to his ideals of justice and right. Such was Solomon Kane.”Collected in this volume, lavishly illustrated by awardwinning artist Gary Gianni, are all of the stories and poems that make up the thrilling saga of the dour and deadly Puritan, Solomon Kane. Together they constitute a sprawling epic of weird fantasy adventure that stretches from sixteenthcentury England to remote African jungles where no white man has set foot. Here are shudderinducing tales of vengeful ghosts and bloodthirsty demons, of dark sorceries wielded by evil men and women, all opposed by a grim avenger armed with a fanatic’s faith and a warrior’s savage heart.This edition also features exclusive story fragments, a biography of Howard by scholar Rusty Burke, and “In Memoriam,” H. P. Lovecraft’s moving tribut to his friend and fellow literary genius.From the Trade Paperback edition.