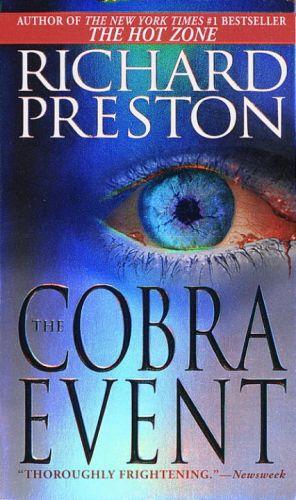 The Cobra Event is set in motion one spring morning in New York City, when a seventeen-year-old student wakes up feeling vaguely ill. Hours later she is having violent seizures, blood is pouring out of her nose, and she has begun a hideous process of self-cannibalization. Soon, other gruesome deaths of a similar nature have been discovered, and the Centers for Disease Control sends a forensic pathologist to investigate. What she finds precipitates a federal crisis.
The details of this story are fictional, but they are based on a scrupulously thorough inquiry into the history of biological weapons and their use by civilian and military terrorists. Richard Preston's sources include members of the FBI and the United States military, public health officials, intelligence officers in foreign governments, and scientists who have been involved in the testing of strategic bioweapons. The accounts of what they have seen and what they expect to happen are chilling.
The Cobra Event is a dramatic, heart-stopping account of a very real threat, told with the skill and authority that made Preston's The Hot Zone an internationally acclaimed bestseller.
From the Trade Paperback edition.