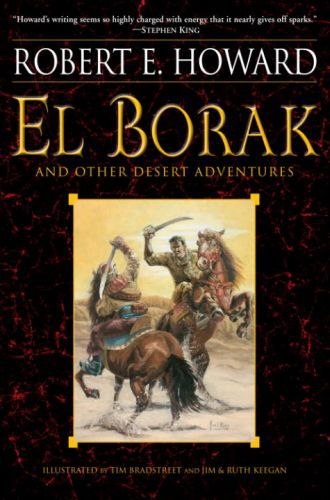 El Borak and Other Desert Adventures

Robert E. Howard is famous for creating such immortal heroes as Conan the Cimmerian, Solomon Kane, and Bran Mak Morn. Less wellknown but equally extraordinary are his nonfantasy adventure stories set in the Middle East and featuring such twofisted heroes as Francis Xavier Gordonyes'>mdash;known as yes'>ldquo;El Borakyes'>rdquo;yes'>mdash;Kirby O’Donnell, and Steve Clarney. This trio of hardfighting Americans, civilized men with more than a touch of the primordial in their veins, marked a new direction for Howard’s writing, and new territory for his genius to conquer.The wily Texan El Borak, a hardened fighter who stalks the sandscapes of Afghanistan like a vengeful wolf, is rivaled among Howard’s creations only by Conan himself. In such classic tales as yes'>ldquo;The Daughter of Erlik Khan,yes'>rdquo; yes'>ldquo;ThreeBladed Doom,yes'>rdquo; and yes'>ldquo;Sons of the Hawk,yes'>rdquo; Howard proves himself once again a master of action, and with plenty of eerie atmosphere his plotting becomes tighter and twistier than ever, resulting in stories worthy of comparison to Jack London and Rudyard Kipling. Every fan of Robert E. Howard and aficionados of great adventure writing will want to own this collection of the best of Howard’s desert tales, lavishly illustrated by awardwinning artists Tim Bradstreet and Jim & Ruth Keegan.From the Trade Paperback edition.