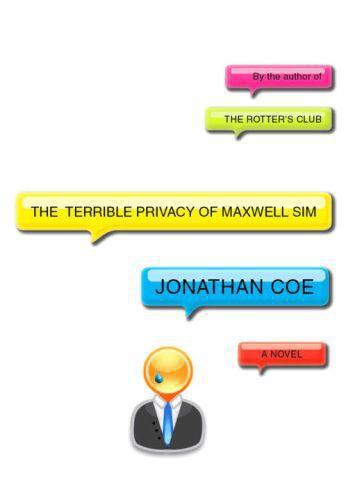 The Terrible Privacy of Maxwell Sim is Jonathan Coe's latest heart-breaking and hilarious novel Maxwell Sim could be any of us. He could be you.

He's about to have a mid-life crisis (though eh doesn't know it yet). He'll be found in his car in the north of Scotland, half-naked and alone, suffering hypothermia, with a couple of empty whisky bottles and a boot full of toothbrushes.

It's a far cry from a restaurant in Sydney, where his story starts.

But then Maxwell Sim has, unknowingly, got a long way to go. If he knew now about his lonely journey to the Shetland Isles, or the truth about his father and the folded photograph, or the mystery of Poppy and her peculiar job, or even about Emma's lovely, fading voice, then perhaps he's stay where he was - hiding from destiny.

Equal parts funny and moving, The Terrible Privacy of Maxwell Sim will be cherished by readers everywhere, from fans of David Nicholls to Will Self.

'Witty, unexpected and curiously unsettling. Coe carries it off with empathy, comedy and a ventriloquist's ear for idiom' Literary Review 'Clever, engaging, spring-loaded with mysteries and surprises' Time Out 'Masterly, highly engaging. Coe's eye for the details of contemporary life remains as sharp as ever' Daily Mail Jonathan Coe's novels are filled with biting social commentary, moving and astute observations of life and hilarious set pieces that have made him one of the most popular writers of his generation. His other titles, The Accidental Woman, The Rotters' Club (winner of the Everyman Wodehouse prize), The House of Sleep (winner of the1998 Prix Médicis étranger), A Touch of Love, What a Carve Up! (winner of the 1995 John Llewellyn Rhys Prize) and The Rain Before it Falls, are all available in Penguin paperback.