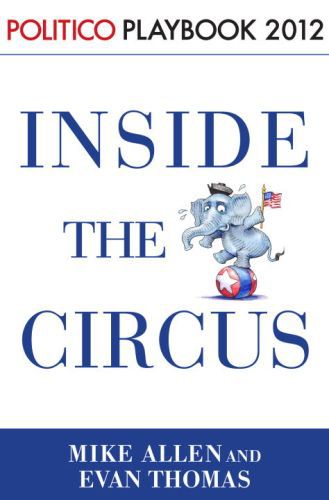 Inside the Circus--Romney, Santorum and the GOP Race: Playbook 2012 (P

Two of Americas most perceptive political reporters join forces for an unprecedented behind-the-scenes look at the race for the White House in POLITICOs Playbook 2012, a series of four instant digital books on the 2012 presidential election. The second edition, Inside the Circus, pulls back the curtain on the pursuit of the Republican nomination, as operatives jockey for position and strategists vie to fashion a message that can win over all factions of the fractious GOP.
Over the course of a long winter and into the spring, the contest for the 2012 Republican presidential nomination gathered steam and bubbled over with drama. At times it seemed more like a soap opera or reality show than a political campaign. Inside the Circus, the latest real-time digital dispatch from acclaimed political correspondent Mike Allen and award-winning journalist and author Evan Thomas, chronicles each turn in this endlessly surprising race with reporting straight from the campaign war rooms of Mitt Romney, Rick Santorum, and the other GOP contenders.
What was the thinking inside the Romney brain trust as what was once expected to be an easy ride to the nomination turned into what some have called a long slog? How did Newt Gingrich throw the preternaturally poised Romney off his game in South Carolina--and who convinced the former Massachusetts governor it was time to start punching back? Why were the other ampaigns caught flat-footed by the rise of Rick Santorum and what does his unlikely ascent mean for the prospect of a brokered convention? From the Iowa caucuses to Super Tuesday and beyond, Allen and Thomas answer all the questions the headlines, polls, and delegate counts cant address. The stakes are high, the plotlines are still unfolding, and Inside the Circus is your fly-on-the-wall guide to the most fascinating Republican presidential race in recent memory.