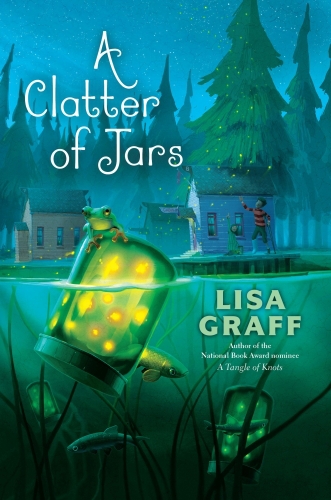 A Clatter of Jars

One of the finest novelists of her generation, National Book Award nominee Lisa Graff returns readers to the world of A Tangle of Knots, where a camp for Talented kids just might be a recipe for disaster. In this magical companion to the National Book Award nominee A Tangle of Knots, it's summertime and everyone is heading off to camp. For Talented kids, the place to be is Camp Atropos, where they can sing songs by the campfire, practice for the Talent show, and take some nice long dips in the lake. But what the kids don't know is that they've been gathered for a reason--one that the camp's director wants to keep hidden at all costs. Meanwhile, a Talent jar that has been dropped to the bottom of the lake has sprung a leak, and strange things have begun to happen. Dozens of seemingly empty jars have been washing up on the shoreline, Talents have been swapped, and memories have been ripped from one camper's head and placed into another. And no one knows why. With a camp full of kids, a lake full of magic, and a grown-up full of a secrets, A Clatter of Jars is story of summer, family, and the lengths we go to win back the people we love. Perfect for readers who loved Katherine Paterson's The Great Gilly Hopkins or Louis Sachar's Holes. Praise for Lisa Graff's novels: A Clatter of Jars: "Graff is a master of the magical realism genre, and this offering is worthy of a spot in any middle grade collection."--School Library Journal "Graff’s vivid character development and world building makes for tight plotting and nicely negotiable complexity. A great fit for fans of Louis Sachar’s Holes."--Booklist A Tangle of Knots “Lisa Graff has created a beautiful world of deliciously interconnected stories that draw you in.”--Abby West, Entertainment Weekly, A- * “Subtle and intricate, rich with humor and insight, this quietly magical adventure delights.”--Kirkus Reviews *STARRED REVIEW* * “Combining the literary sensibility of E. B. White with the insouciance of Louis Sachar, Graff has written a tangle that should satisfy readers for years to come.”--Booklist *STARRED REVIEW* Lost in the Sun * "Graff writes with stunning insight [and] consistently demonstrates why character-driven novels can live from generation to generation."--Kirkus Reviews *STARRED REVIEW* * "Graff creates layered, vulnerable characters that are worth getting to know."--Booklist *STARRED REVIEW* * "[A]n ambitious and gracefully executed story."--Publishers Weekly *STARRED REVIEW* * "Weighty matters deftly handled with humor and grace will give this book wide appeal."--School Library Journal *STARRED REVIEW* * "Characterization is thoughtful."--BCCB *STARRED REVIEW* "In Lost in the Sun, Trent decides that he will speak the truth: that pain and anger and loss are not the final words, that goodness can find us after all--even when we hide from it. This is a novel that speaks powerfully, honestly, almost shockingly about our human pain and our human redemption. This book will change you."--Gary Schmidt, author of The Wednesday Wars and Lizzie Bright and the Buckminster Boy "Lisa Graff crafts a compelling story about a boy touched with tragedy and the world of people he cares about. And like all the best stories, it ends at a new beginning."--Richard Peck, author of A Year Down Yonder and A Long Way From Chicago From the Hardcover edition.