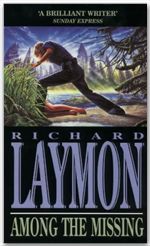 She thought he was offering her a chance of escape. She was wrong.
Richard Laymon's Among the Missing is a riveting horror novel, full of shocking revelations, twists and turns. Perfect for fans of Stephen King and Clive Barker.'Among the Missing is strikingly different. From the chilling opening...we are plunged into a disturbing world of twisted psychopathology' - The TimesAt 2:32 in the morning a Jaguar roars along a lonely road high in the Californian mountains. Behind the wheel sits a beautiful woman wearing only a skimpy, revealing nightgown. She's left her husband behind. She's after a different kind of man - someone as wild, daring and passionate as herself. The man she wants is waiting for her... with wild plans of his own.The man waits patiently in the woods. When the woman stops to pick him up, he suggests they go to the Bend, where the river widens and there's a soft sandy beach. With the stars overhead and moonlight on the water, it's an ideal place for love. But there will be no love tonight. In the morning a naked body will be found at the Bend - a body missing more than its clothes. And the man will be waiting for someone else... What readers are saying about Among the Missing: 'Throw in some dark humour and Laymon's assortment of oddball characters and the book delivers a nice chunk of escapism for a few hours, with some surprising plot twists''Without a doubt one of the most gripping stories he has ever written. A classic story of murder, mayhem, decapitation and double-edged twists [that run] the whole way through''The suspense lurks beneath the surface until the final Hollywood-style ending