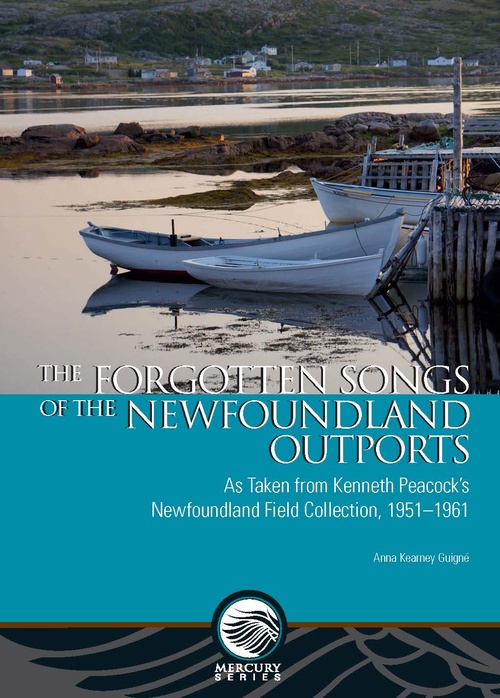 The Forgotten Songs of the Newfoundland Outports

In 1951, musician Kenneth Peacock (1922-2000) secured a contract from the National Museum of Canada (today the Canadian Museum of History) to collect folksongs in Newfoundland. As the province had recently joined Confederation, the project was deemed a goodwill gesture, while at the same time adding to the Museum's meager Anglophone archival collections. Between 1951 and 1961, over the course of six field visits, Peacock collected 766 songs and melodies from 118 singers in 38 communities, later publishing two-thirds of this material in a three-volume collection, Songs of the Newfoundland Outports (1965). As the publication consists of over 1000 pages, Outports is considered to be a bible for Newfoundland singers and a valuable resource for researchers. However, Peacock's treatment of the material by way of tune-text collations, use of lines and stanzas from unpublished songs has always been somewhat controversial. Additionally, comparison of the field collection with Outports indicates that although Peacock acquired a range of material, his personal preferences requently guided his publishing agenda.
To ensure that the songs closely correspond to what the singers presented to Peacock, the collection has been prepared by drawing on Peacock's original music and textual notes and his original field recordings. The collection is far-ranging and eclectic in that it includes British and American broadsides, musical hall and vaudeville material alongside country and western songs, and local compositions. It also highlights the influence of popular media on the Newfoundland song tradition and contextualizes a number of locally composed songs. In this sense, it provides a key link between what Peacock actually recorded
and the material he eventually published. As several of the songs have not previously appeared in the standard Newfoundland collections, The Forgotten Songs sheds new light on the extent of Peacock's collecting.
The collection includes 125 songs arranged under 113 titles along with extensive notes on the songs, and brief biographies of the 58 singers.
Thanks to the Research Centre for the Study of Music Media and Place, a video of the launch event, held in St.John's, Newfoundland, is available at https://www.youtube.com/watch?v=ghj6E6-QiLI&t=21s.