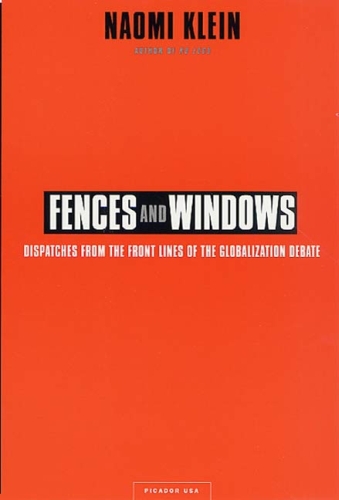 Naomi Klein's No Logo is an international bestselling phenomenon. Winner of Le Prix Mediations (France), and of the National Business Book Award (Canada) it has been translated into 21 languages and published in 25 countries.Named one of Ms Magazine's Women of Year in 2001, and declared by the Times (London) to be "probably the most influential person under the age of 35 in the world," in Fences and Windows, Naomi Klein offers a bird's-eye view of the life of an activist and the development of the "anti-globalization" movement from the Seattle World Trade Organization protests in 1999 through September 11, 2001. Bringing together columns, speeches, essays, and reportage, Klein once again provides provocative arguments on a broad range of issues. Whether she is discussing the privatization of water; genetically modified food; "free trade;" or the development of the movement itself and its future post 9/11, Naomi Klein is one of the most thoughtful and brilliant activists and thinkers for a new generation.