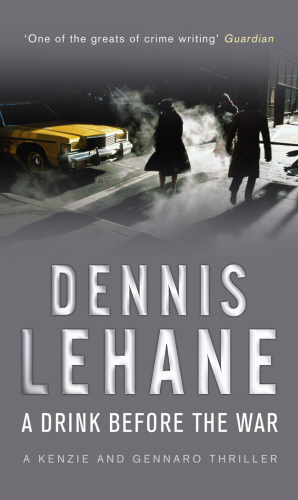 A Drink Before The War

Patrick Kenzie and Angela Gennaro are tough private investigators who know the blue-collar neighbourhoods and ghettos of Boston's Dorchester section as only natives can. Working out of an old church belfry, Kenzie and Gennaro take on a seemingly simple assignment for a prominent politician: to uncover the whereabouts of Jenna Angeline, a black cleaning woman who has allegedly stolen confidential Statehouse documents.
But finding Jenna proves easy compared to staying alive. The investigation escalates, uncovering a web of corruption extending from bombed-out ghetto streets to the highest levels of state government.With slick, hip dialogue and a lyrical narrative pocked by explosions of violence, A Drink Before the War confronts a city in which institutionalized bigotry and corruption are often the norm, and the true nature of 'racial incidents' is rarely clear. Dennis Lehane's remarkable debut is at once a pulsating crime thriller and a mirror of our world, one in which the worst human horrors are found closest to home, and the most vicious obscenities are committed in the name of love.