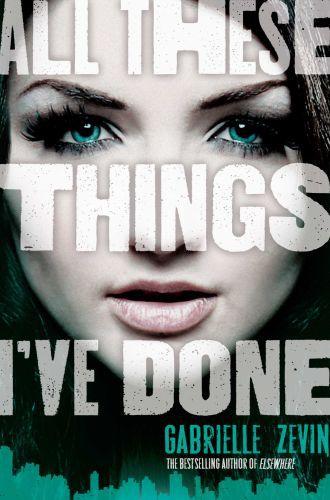 All These Things I've Done

Sixteen year-old Anya's parents have been murdered because her father was the head of a notorious underworld gang. Now she is determined to keep herself and her siblings away from that world. But her father’s relatives aren't so keen to let them go. When Anya’s violent ex-boyfriend is poisoned with contaminated chocolate - chocolate that is produced illegally by Anya’s criminal family - she is arrested for attempted murder. Disconcertingly, it is the new D.A. in town who releases her from jail, but her freedom comes with conditions. The D.A. is the father of Win, a boy at school to whom Anya feels irresistibly drawn. Win’s father won’t risk having his political ambitions jeopardised by his son seeing a member of a crime family. She is to stay away with him. Anya knows she risks her freedom and the safety of her brother and sister by seeing Win again. Neither the D.A. nor the underworld will allow it. But the feeling between them is so strong that she may be unable to resist him . . .