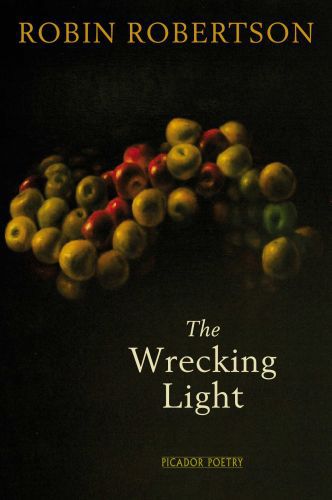 Robin Robertson’s fourth collection is, if anything, an even more intense, moving, bleakly lyrical, and at times shocking book than Swithering, winner of the Forward Prize. These poems are written with the authority of classical myth, yet sound utterly contemporary: the poet’s gaze – whether on the natural world or the details of his own life – is unflinching and clear, its utter seriousness leavened by a wry, dry and disarming humour. Alongside fine translations from Neruda and Montale and dynamic (and at times horrific) retellings of stories from Ovid, the poems in The Wrecking Light pitch the power and wonder of nature against the frailty and failure of the human. Ghosts sift through these poems – certainties become volatile, the simplest situations thicken with strangeness and threat – all of them haunted by the pressure and presence of the primitive world against our own, and the kind of dream-like intensity of description that has become Robertson’s trademark. This is a book of considerable grandeur and sweep which confirms Robertson as one of the most arresting and powerful poets at work today. ‘Robin Robertson continues to explore the bleak, beautiful territory that hehas made his own. His stripped-bare lyricism, haunted by echoes of folksong, is as unforgiving as the weather and poems such as 'At Roane Head' show him writing at the height of his considerable powers’ The Times