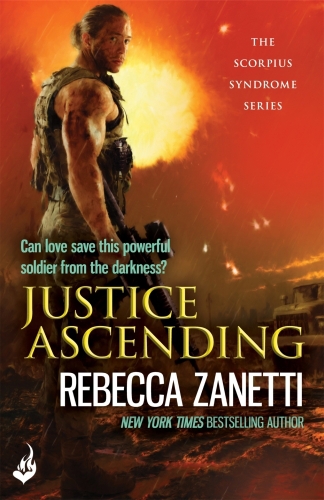 Justice Ascending is the third enthralling book in Rebecca Zanetti's The Scorpius Syndrome series, following Mercury Striking and Shadow Falling, perfect for fans of Cynthia Eden, Dianne Duvall and Nalini Singh. Danger has never looked quite so delicious...Before Scorpius, Tace Justice was a good ole Texas cowboy who served his country. After surviving the bacterium, the world became dark, dangerous, and deadly - and so did he. The Vanguard medic is stronger, faster and smarter than before, but he's losing the line between right and wrong. His passion is absolute, and when he focuses it on one woman, there's no turning back for either of them . . . Sami Steel has been fighting to survive alongside Tace, convincing the Vanguard soldiers she's one of them. In truth, Sami is a former hacker turned government agent who worked at The Bunker, where scientists stored both contaminants and cures - and she never wants to go back. Yet when sexual fire explodes between her and Tace, she'll face even that hell again to save him.For more thrilling passion played out against a dangerous race for survival, look for the rest of the titles in The Scorpius Syndrome series: Mercury Striking and Shadow Falling.