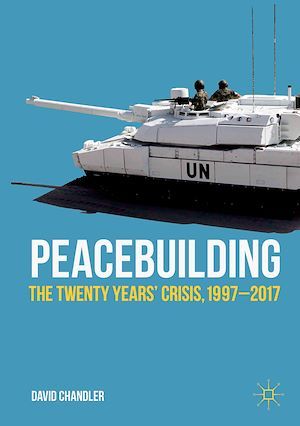 This book is the first to chart the rise and fall of peacebuilding. Charting its beginnings, as an ad-hoc extension of peacekeeping responsibilities, and formalisation, as a UN-supported international project of building liberal states. Twenty years later, the grounding policy assumptions of peacebuilding - that democracy, the rule of law and free markets were a universal solution to conflict-prone states and societies - have been revealed as naïve at best, and at worst, hubristic and Eurocentric.

Here, Chandler traces the disillusionment with international peacebuilding, and the discursive shifts in the self-understanding of the peacebuilding project in policy and academic debate. He charts the transformation from peacebuilding as an international project based on universalist assumptions, to the understanding of peace as a necessarily indigenous process based on plural and non-linear understandings of difference. Is the end of peacebuilding necessarily a cause for celebration? Does this shift result in a realist resignation to the world as it appears? Is it necessary to "marry idealism with realism" - as E.H. Carr once argued - if we wish to keep open the possibilities for social change? This book seeks to answer these questions, making an invaluable reference both for students and practitioners of peacebuilding and for those interested in the broader shifts in the social and political grounding of policy-making today.